Deborah Harse is a New York based photographer, director and marathon runner, who repeatedly answers the call of the wild. Today, she takes a break to reflect on her special passage to India. 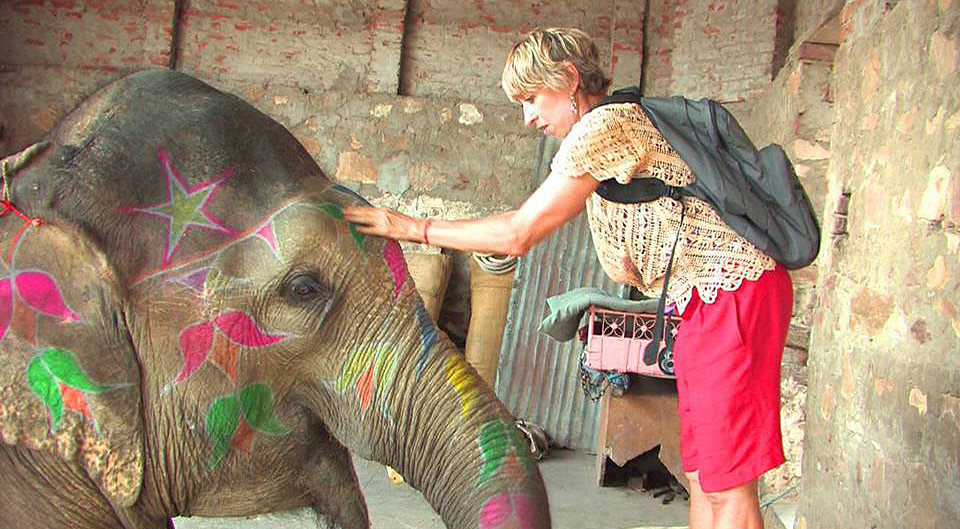 What brought you to Jaipur, India?

Deborah Harse:  At the beginning of 2012 I was without a project, and that is always uncomfortable. Winter had set in and that too, was uncomfortable. So I decided to escape the cold and head to India, for the fourth time. Before leaving I researched festivals and found that every year during the March full moon there was an elephant festival in Jaipur. It peaked my curiosity, so I packed my video camera thinking that I would get there a week before the festival and see what I could find.

How did you meet and build relationships with the Mahouti?

Initially I was a bit apprehensive, not knowing how the elephants were treated. Nevertheless, upon arrival in Jaipur I began to ask drivers, fruit sellers, and random people on the street about the situation with elephants. These inquiries lead me to a suburb where three elephants and their mahouts resided. The elephants were in a compound and the mahouts lived in homes nearby. The mahouts do not own the elephants, but are their caretakers and drivers. They were very friendly and agreed to let me come the following morning, to film them going about their workday at Amber Fort, a UNESCO World Heritage Site. There tourists can ride elephants up the hill which leads to the top of the fort.

Upon arrival, there was a traffic jam causing a backup of cars, motorbikes, tourist buses, elephants and their mahouts coming to work. While at complete standstill, a tourist opened a bus window and reached out to touch Rupkali, one of elephants I had met the day before. Of her own volition, Rupkali leaned her great girth toward the bus to allow the tourist to pet her easily. Witnessing this, I realized that these elephants in fact like the company of people, and this would not be the case if they had negative associations with them due to having been abused. So there and then I decided to go ahead with this project and ultimately spent eight days with them.

What was your routine for shooting?

I got up early, went to the compound and filmed the mahouts bathing, feeding and preparing the elephants for work. Then I filmed them while walking the four miles to Amber fort, giving rides to tourists, and then walking home. The law requires that the elephants stop working before the midday heat sets in, so the mahouts spend the rest of the day lovingly tending to the elephants back at the compound. In preparation for the upcoming Elephant Festival, they painted them as well. In the end, getting to know the mahouts, many of their neighbors, and the personalities of the elephants, turned out to be far more interesting than the festival event, that drew me there in the first place.

What were some challenges you faced while shooting?

On one of my first days of shooting at Amber Fort, I was navigating my way through the dozens of elephants who were walking in two lines, one heading up to the fort, the other going back down. I was concentrating on filming when suddenly I felt a painful slap across my arm. I had been hit by an elephant’s tail! It was not intentional on the part of the elephant. I was just in the wrong place at the wrong time, but I was truly shocked by how much it hurt. Who would have thought that a such a sweetly swinging tail could pack such a punch? After that, I paid more attention to what was going on in my peripheral vision.

What type of gear did you use?

I used a Canon XLH1 HD video camera, with only the on­camera microphone. It’s an eight pound shoulder mount camera, that shoots mini DV HD tapes, which in 2012 was already an old technology. I have since moved on to a Canon XF200, but in it’s day the old Canon hulk served me well.

What were your personal favorites in Jaipur?

My favorite place in Jaipur is Jal Mahal, the area where the mahouts and elephants live. There, children of all ages are growing up thinking it normal to share their streets and alleys with elephants and play in their midsts. As beloved members of the community, neighbors often come out to greet the elephants, offer them food, and pat their trunks.

Are you still in touch with the mahouts? what do they think of the video?

Yes, we are still in touch. They don’t have email, but I returned to visit them in 2014. Then I learned that one of the elephants, Rupkali, had passed away in 2013. She was fifty years old. Kahn, her mahout, was sixty and they had spent forty years together. He always referred to her as his second wife and was devastated by the loss. So the film has become, in part, a document of their relationship. He has no plans to take on another elephant as his personal charge, but instead oversees the compound which now houses four elephants.

The film screened at nineteen film festivals over 2013 and 2014. I did manage to attend some of them. During the screenings I took still photos from the back of the theater, so I could show the mahouts that audiences on the other side of the world had seen and heard them. This past February, 2015, I went back to see them again and gave them CDs of the stills. Of course they found them amusing, and the film did win four awards during its festival run.

What did your experiences with this project teach you about yourself?

It was not about a new discovery, but rather a renewed affirmation of lessons already learned. In an effort to get the shots I wanted, I usually had to run to get ahead of the elephants or catch up with them after getting shots from behind. I’ve been a runner for many years (fifty marathons and still going), but it was tough running after elephants while wearing a backpack and lugging an eight pound camera.

In addition to the physical exertion there was always that anxious feeling about getting the shot; Gotta run faster to catch that elusive moment that won’t happen again! Just when you think you can’t go any farther or any faster, or haul any more weight, human nature kicks in. You dig down deeper and get it done. We all have so much more energy and strength than we know. It was wonderful to be challenged in a way that reminded me of that universal truth.