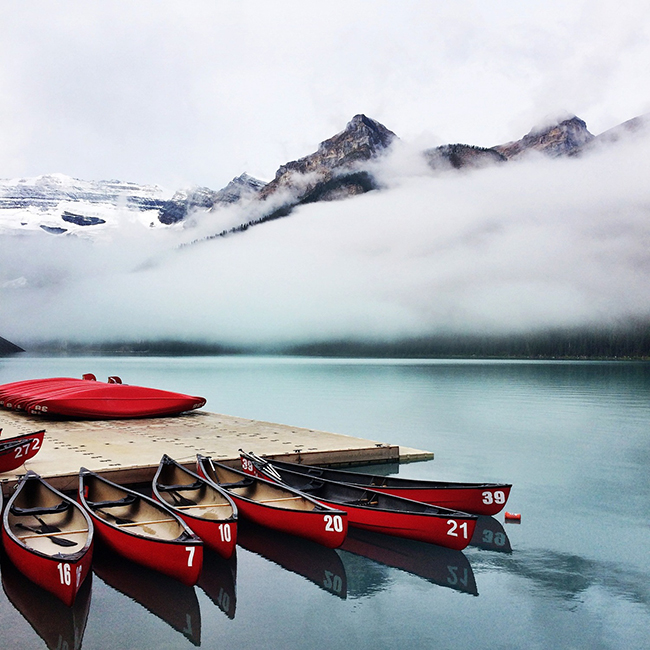 Navigating social media can sometimes feel like navigating a labyrinth of facades where nothing is ever as it seems. Some people use it to escape into the lives of others, wishing they too could live the “fabulous” lives being projected; while others use it as a tool to connect and expose themselves to new people, places, opportunities, and experiences (I’d strongly suggest against the former ­it’s masochistic and the quickest way to feel inferior about your own life).

Case in point, last summer whilst casually pinning away on Pinterest wishing I could be exploring a foreign city instead of moping around feeling sorry for myself in my bedroom (relationship woes thank God that’s over!), I came across the most stunning photo​ of Lake Louise. There wasn’t anything particularly exciting about the photo either – no exotic wildlife, no major cultural difference from my own, no adrenaline inducing activities. Just two small red canoes floating on the clearest blue lake at the base of some insanely impressive mountains. Much to my own surprise, that was enough to spark my interest. Who knew I’d ever want to take a trip with the sole purpose of being out in nature? Certainly not me. 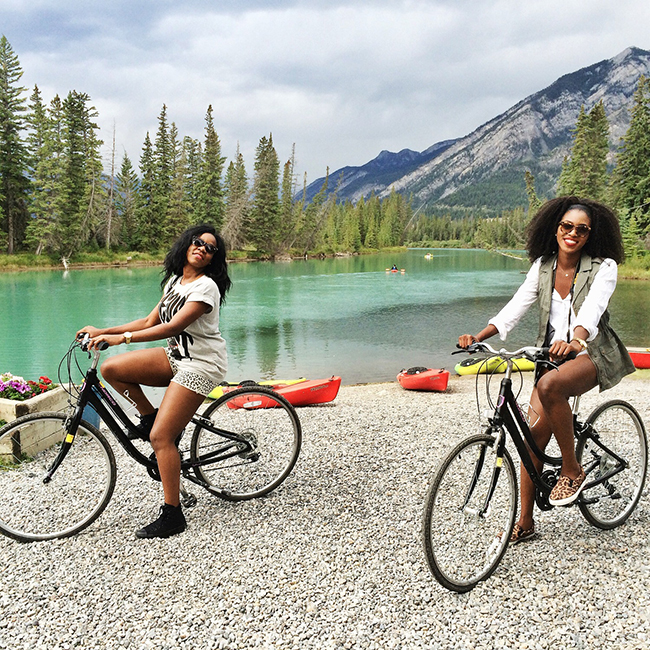 I’d originally intended to venture to Lake Louise solo, but I decided to reach out to my childhood friend Brenda​ (who lives in Edmonton), hoping we could reconnect and make it a bonding experience. To be completely honest though, the introvert in me was weary. Would we still get along? Would we have anything to talk about like we once did? Would she be open and adventurous? These were very important questions to ask myself seeing as we hadn’t seen or spoken to each other in years. But alas, I’ve been trying this new thing where I stop over­analyzing everything and fight against my loner tendencies. And you know what, I’m SO GLAD I DID! Fast forward several months and we had solidified our plans to meet in Calgary then road trip through the great province of Alberta together.

As it turns out, there were no awkward silences and we still had an abundance of things to talk about. Brenda was open, hilarious, and most importantly down to Earth. Win, win, win! After meeting up at the airport and catching up for several hours, we began our drive from Calgary to Banff, drove through the Icefield Parkway into Jasper, then finally continued on to Edmonton; allotting a few days between each city to properly explore and visit surrounding lakes and trails. 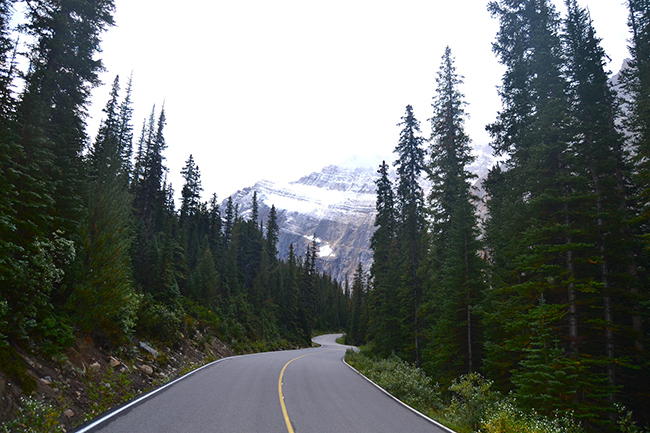 Driving through Alberta was beyond scenic and quite a surreal experience, as it literally felt like we were existing within a painting. My favorite route was definitely driving the Icefield Parkway into Jasper because everywhere I looked was a photo opportunity (and for a visual person like myself, that’s essentially heaven). Even with caution signs everywhere warning us to beware of bears and other forms of wildlife that could potentially stroll onto the freeway, the drive was also pretty easy. Navigating past crazy drivers was actually much more difficult than swerving past a few wandering elk. 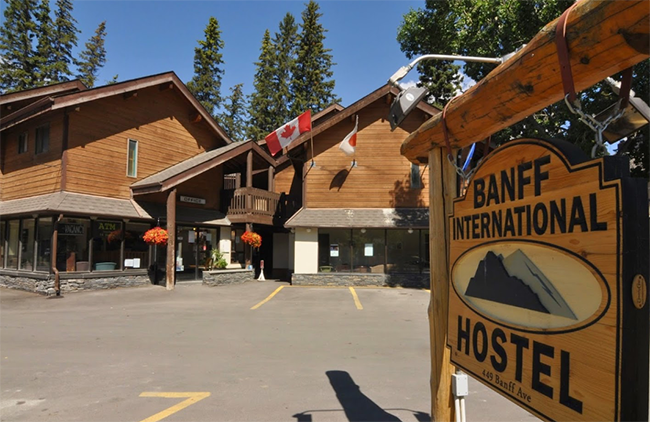 Hostels are almost always my first choice for accommodation while traveling. They’re budget friendly, allow you to better interact with other travelers, and chances are you’ll get the best local advice and activity suggestions from their staff. After introducing Brenda to the concept, she was initially apprehensive but a complete sport about it; deciding to go along with another one of my crazy ideas.

The ​B​anff International Hostel​w​as pretty standard as far as hostels go: safe and perfectly located (there was a liquor store next door), comfortable and clean beds, helpful staff, and strong Wi­Fi. Due to the no partying rule imposed on guests, the atmosphere was also much calmer than I have ever experienced at a hostel. A plus, since I was with someone who might have been overwhelmed by the typical wild nights hostels are infamous for.

The next accommodation was Hostelling International in Jasper (aka “The Rustic”). Where to begin? It was the best of times; it was the worst of times. From inception, this place was more than a little strange. After booking our reservation a few days prior to our arrival, we received an email disclaimer from the company stating they would not be liable for any unfortunate events that may or may not occur, as a result of our stay at their establishment. Apparently their isolated location at the peak of a mountain is an ideal hangout for Grizzly Bears. Umm…what? Oh, but it gets better. 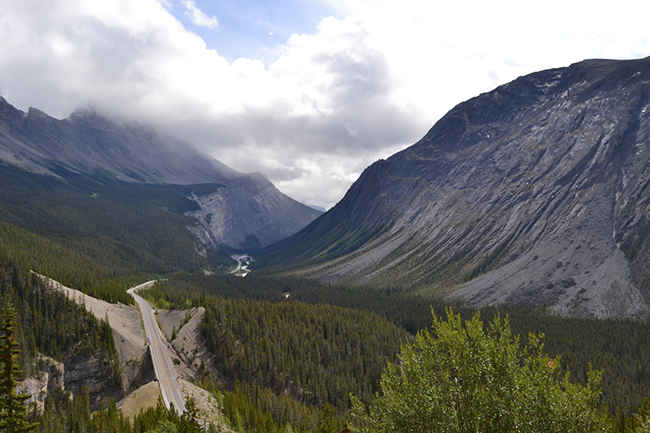 It wasn’t until after our reservation was confirmed that we were then told this would actually be a wilderness hostel ­ which is basically just sophisticated jargon for a roofed campsite. There would be no running water (read: no showers or proper toilets) and electricity. Only one outhouse (aka a pit toilet – THE HORROR), a few oil lamps, and a small public stream would be available to guests.

As Brenda read the email to me, I literally laughed myself to tears. To say we were shocked is an understatement. Once in Jasper, we had no choice but to brave The Rustic because as luck would have it, everywhere else was already at capacity. After making the thirty­minute drive up the narrow, winding roads of the mountain at night, we finally arrived at our wilderness hostel. With no Grizzly’s in site, we decided it was safe enough to stay just the one night.

Looking back, I have to admit the whole experience was quite hilarious (the bottle of wine we shared helped things tremendously). It ended up being the most fun night of our trip because we had no choice but to just let go and laugh at ourselves. We eventually joined in with a few Dutch men for a sing­a­long of some Phil Collins songs (Brenda’s choice, lol!) which made the night even more hysteric. 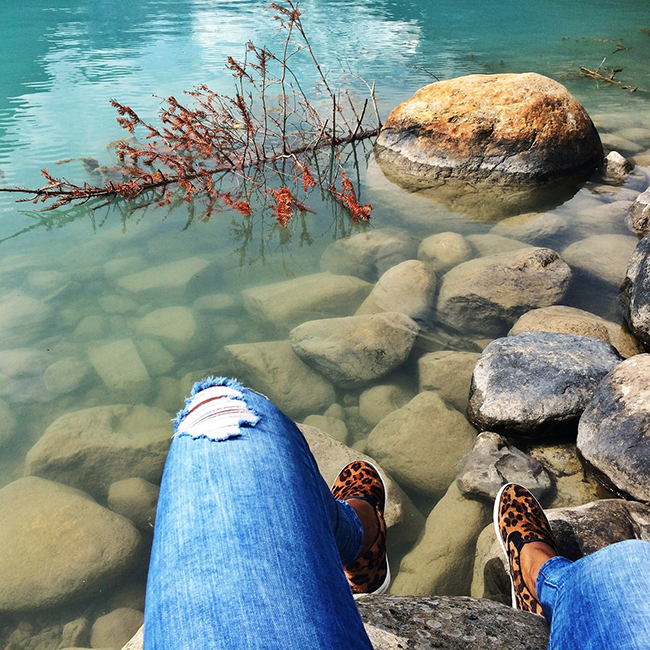 Naturally, we passed on the whole bathing in the stream thing. I’m always open for a new experience, but the thought of a random voyeur watching me bathe was a lot more than I was willing to handle. In lieu of reasonable bathrooms, our first priority the next morning was to find a hotel in town to shower and just gather ourselves in. After searching aimlessly for an hour, we finally found out from the city info center that there was a nearby coffee shop/laundromat/inn where we could pay to rent showers. Completely blown away that any such business even existed, this moment was the cherry on top of our already very rustic and unconventional sundae. $5 dollars and 15 minutes later, we were finally able to cleanse ourselves from all that remained of our wilderness experience.

Because this was a nature trip, most of the activities available were serene and very laid back – a complete departure from what I’m normally attracted to. Exploring many of the lakes (Lake Minnewanka was a favorite), swimming in hot springs, horseback riding along a few mountain trails, and cycling around the parks (in the rain) left me feeling completely enchanted. 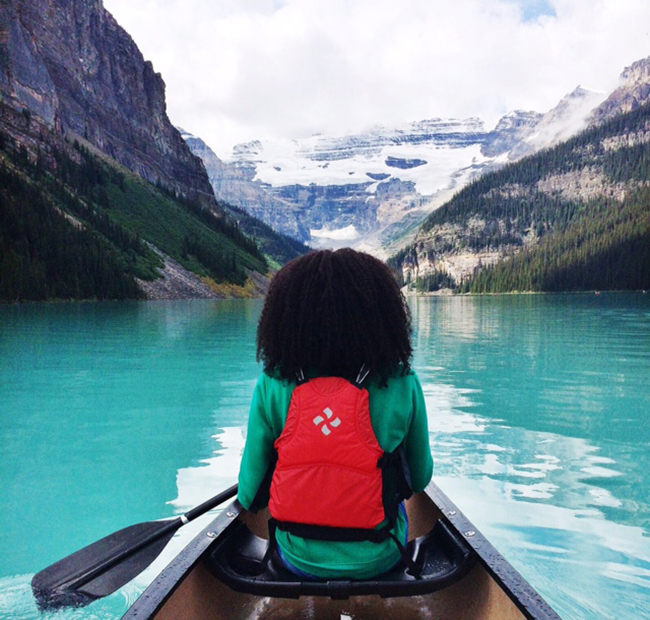 What was most touching though, was to finally canoe along Lake Louise after a year of only imagining it. As beautiful as that photo from Pinterest was, absolutely nothing could have prepared me for the beauty of the real thing.

Photos © ​Lee LitumbeLee Litumbe is a​ Cameroonian by birth, American by upbringing, writer and traveler. She is the founder of the travel blog​ S​pirited Pursuit.​ @​spiritedpursuit