Memories of the American South

Sally Mann is best known for her evocative landscape work in the American South and her intimate portraits of her young children. In her groundbreaking memoir ​Hold Still​ (Little Brown), Mann’s vivid, salty, and illuminating prose matches the artistry of her photographs. Her concerns about family, race, mortality, and the storied landscape of the American South ­ are revealed as almost genetically predetermined, written into her DNA by a colorful cast of characters who came before her. 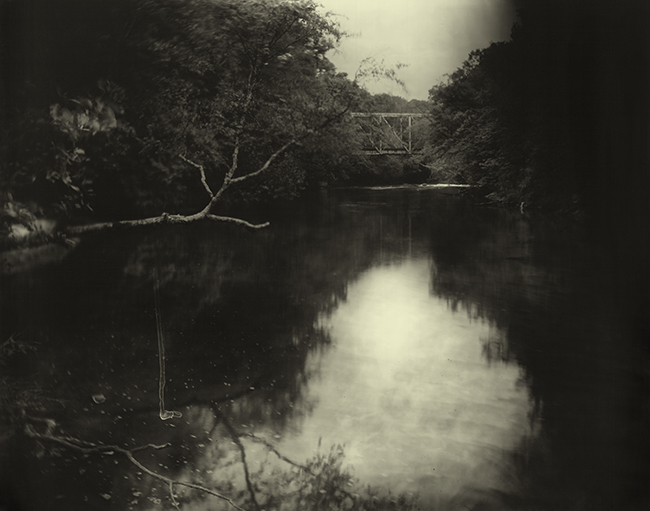 “In 1998, right after bluffing Virginia Farm Credit out of the loan for the farm, I set out on the first of my several trips down into Alabama, Mississippi, and Louisiana.”

“The Suburban was packed to the headliner with coolers of film, smaller coolers with food and booze, nearly identical cylinders of sleeping, film-changing, and tent bags, the lunchbox-sized, primitive cell phone that Larry insisted I take, folders with heavily annotated maps, and in the far back, the darkroom with stacks of frame-quality glass, silver-blackened trays, and explosive, burping bottles of ether-based chemicals.

“Similar in ways to working with ortho film, I found the wet-plate collodion process could give both freedom of expression and the satisfaction of ceremonial process, as if someone had sewn Jackson Pollock’s paint slinging arm onto a body controlled by the brain of Seurat. It was the perfect technique, I now realize, for the granddaughter of that sentimental but methodical Welshman, to use on her travels to the nostalgia-drenched Deep South.”

In telling the entwined visual and narrative story, Mann creates an original form of personal history that has the page­ turning drama of a great novel, but is firmly rooted in the fertile soil of her own remarkable life.