Strike A Pose In Bogota

Strike A Pose In Bogota

Dancing In the Streets 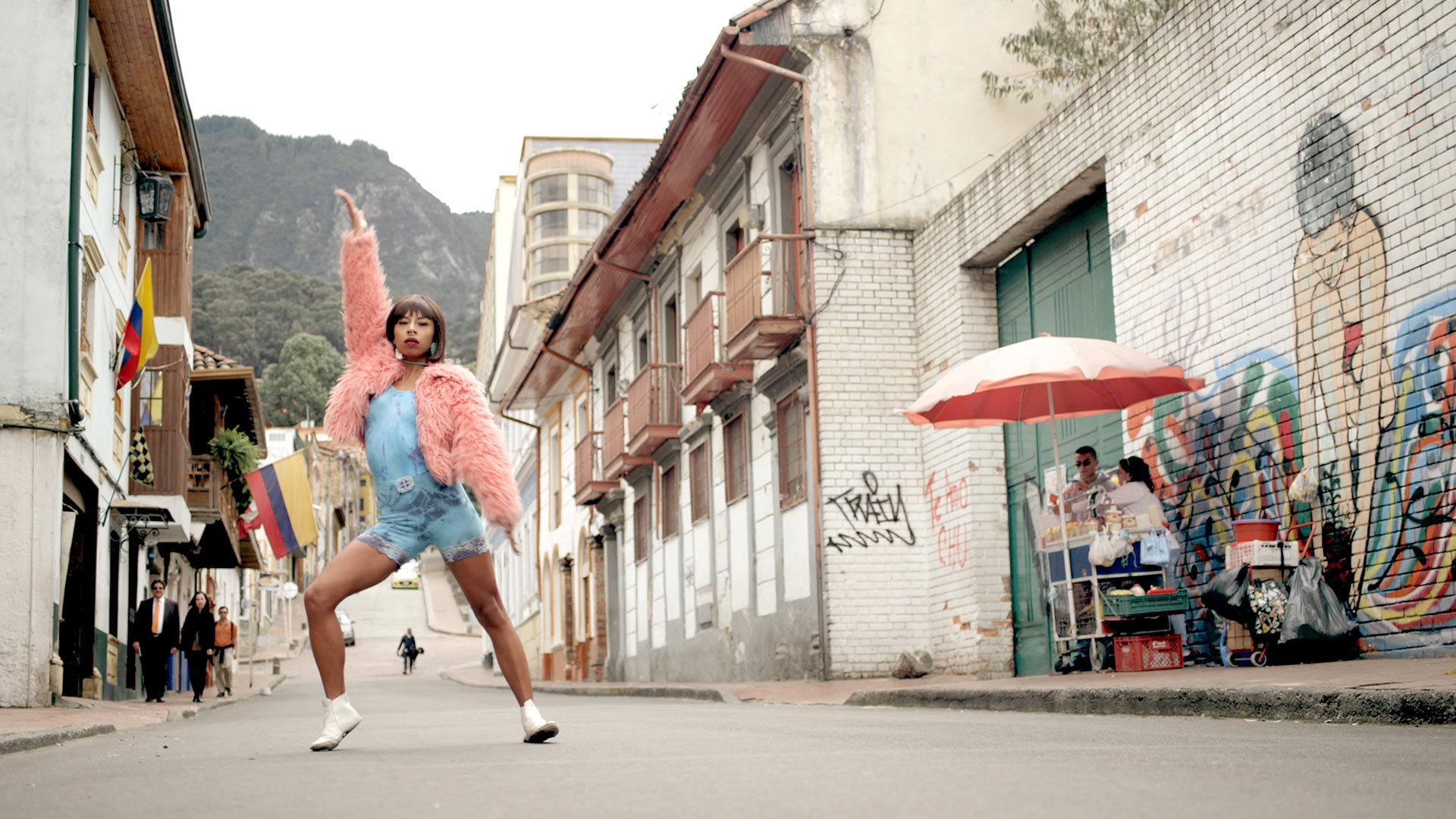 Take a walk on the wild side of Bogotá with film and video director Jacob Krupnick and the illustrious dancer Kia Labeija, as they explore Colombia’s alluring streets and hidden pathways.

Where are you from?

Jacob Krupnick: For starters, I’m from NY, and I’ve lived in Brooklyn for the last 12 years. I’ve explored the world pretty enthusiastically on my own, and work brings me around on all kinds of cool missions.

Have you traveled to Latin America before?

I spent a couple weeks in Ecuador in 2014 shooting documentaries for Intel, but aside from that, I’d never spent time further south than Mexico.

How did your collaboration with Pillar Point come about?

Two years before directing Dove, I made a dance film for the same musician, Pillar Point, called Dreamin. We filmed in New York City, my home town, on the coldest weekend of the year. The music video was, to our surprise, a huge success, so when Pillar Point had a new album coming out, I wanted to work in a similar style. But the music video was due in January, and I had the dream of filming in a huge, colorful fruit market. I’ve filmed a lot in public spaces around New York, so it was time for a change. 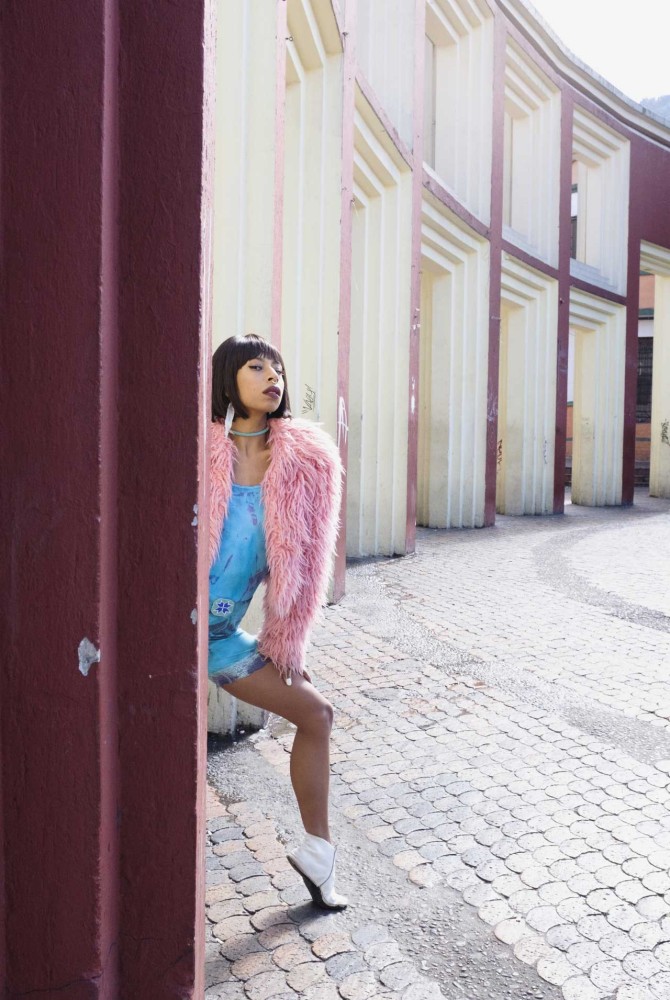 Who is Kia Labeija?

​​Kia is an artist and Vogue dancer from New York. She’s amazing, and a joy to work with. Her focus is incredibly high. Her performance is intense and consistent. She’s a true professional, and I really hope we get to create another dance story together.

What was your concept for the story line?

​​My idea for the story started with two inspirations: the song itself, and my experience learning about Vogue. The song is obviously a dance track, but it has notes of celebration and of melancholy. The lyrics reflect jealousy and longing. In the last couple years, I’ve been going to house dance competitions and Vogue balls to expose myself to new styles and dancers. I asked Kia Labeija to work with me in developing a story about love, jealousy, and heartbreak, based on her personal style and movement. 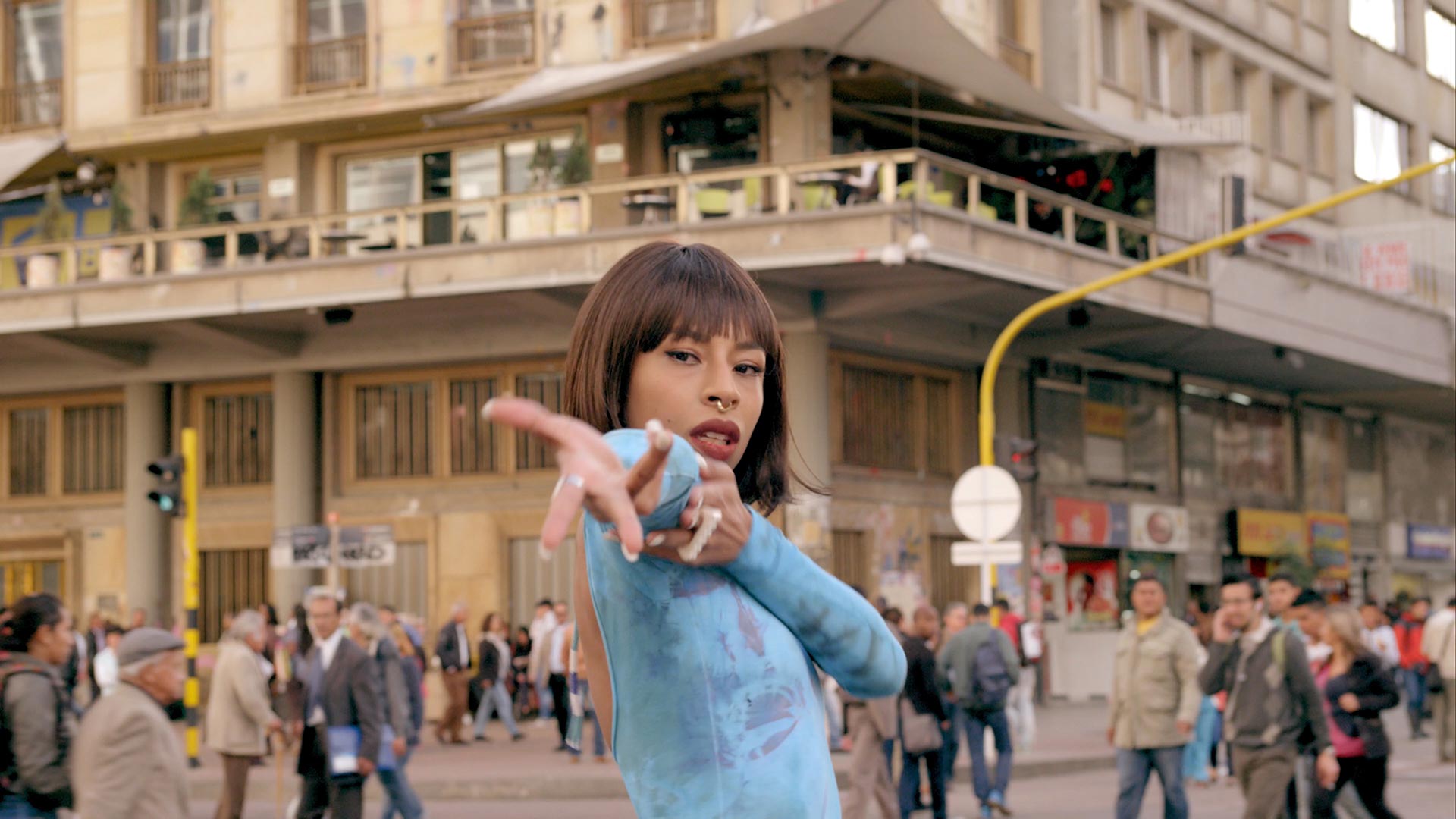 I liked the idea of Kia starting her hunt for her bird, and her lover, on small streets, then working up to a denser neighborhood, and eventually arriving at a bustling heart of the city. This lets the viewer focus on how strong her moves are before she hits the big, busy, public spaces like Polequemao.

When the burros cross in front of Kia as she’s coming toward the camera, I laugh every time. It’s totally unexpected, and she doesn’t blink or lose her focus for a moment. It’s also a moment in the video where it goes from being slightly surreal to completely weird, then back to medium surreal. 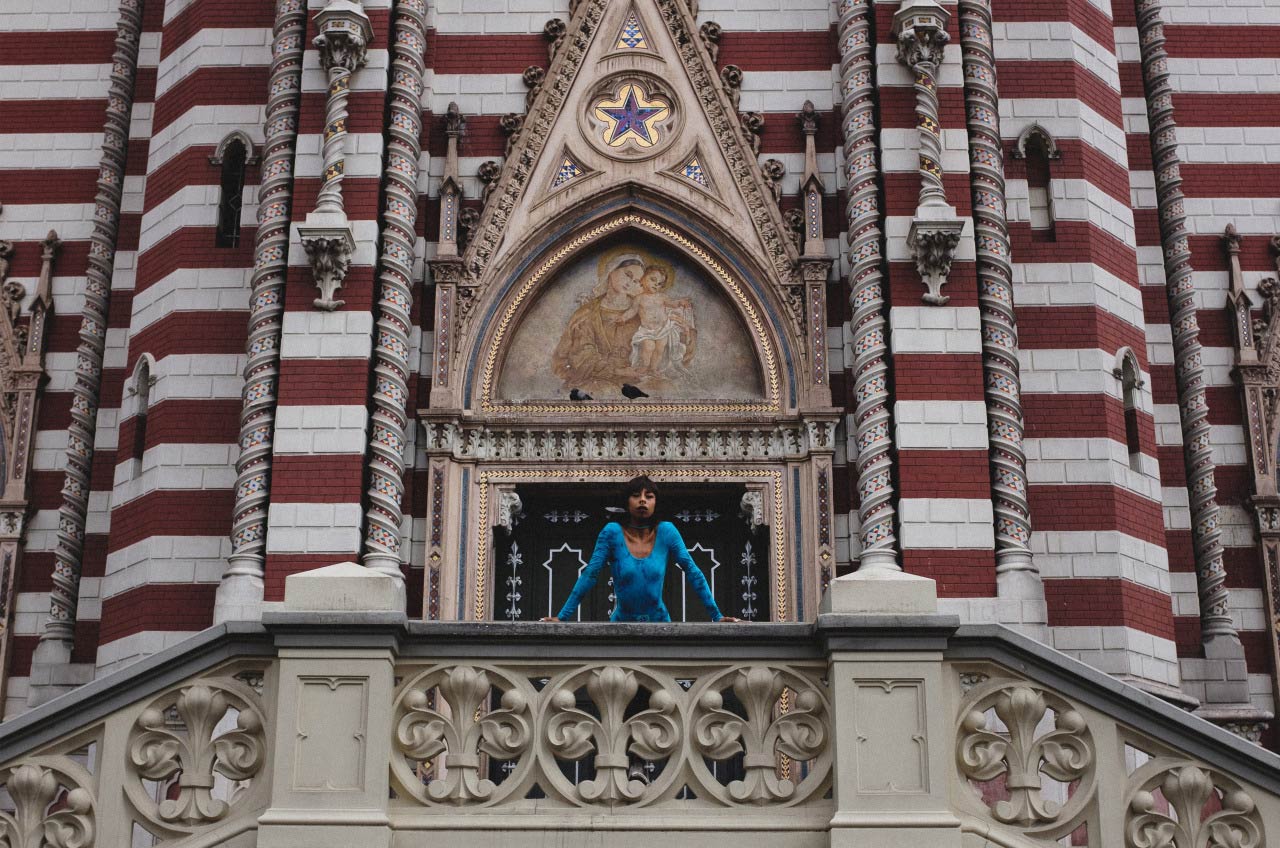 Why did you choose to shoot in Bogota, Colombia?

​​​My friend, and producer, Victoria Rivera, grew up in Bogotá, and when we started talking about the project, she proposed filming in Medellin. I was interested in Oaxaca, where I’ve spent time. Eventually, she showed me photographs of Paloquemao, and I started to get excited. The variation in elevation, the mountain backdrop, the diversity of the streets and older architecture in La Candelaria ­ all of this started to fill my imagination, and become part of the overall idea for the film.

I had no specific idea of what to expect in Bogotá, but I’ve talked with Victoria about growing up there. Our cinematographer, Soren Nielsen, who’s fantastic by the way, has also spent several months there, and so I’ve heard both their stories and seen their photographs.

Victoria and I spent a lot of time exploring neighborhoods on Google Streetview. After that, I did research about the neighborhoods, and incorporated everything I saw into the story. I like working with environments that have texture, but I usually don’t like signage. Logos and cars can ruin your sense of timelessness. While trying to make something great, I don’t want it to feel stuck in December 2015. I want it to be great forever. Working with architecture, light, movement, and music, helps make the piece feel like both a fantasy and a documentary at the same time. I love that.

We rented most of our equipment locally to help make life easier and keep the project local. It often makes sense for film crews to bring everything they need with them, but it’s also nice to have a relationship with people in the place you’re working.

Working with camera equipment and having mobile power is crucial. I bring big ol’ chargers that’ll power an iPhone 15 times, so I don’t have to worry about basic USB ­chargeable things. I can’t bother to get hungry, so I usually travel with several boxes of KIND bars for me and my crew, as well as metal water bottles (I generally drink local water), and packing cubes for getting clothing down to the least amount of space. Basically, I try to preserve as much energy, space, and time, for exploration and making art.

There’s a ton I love about Dove. I almost never make something that I enjoy watching back so much. Taina completely embodies the bird thief, and Kia chases her with perfect extravagance. The descent into the city center makes me very happy ­­ we have a sense that she’s arrived in a place that’s as busy and cosmopolitan as Tokyo or London or Bombay.

What were the challenges of shooting a dance video in the street?

​Bogotá was great to us. I love filming in public spaces. It makes me feel like I’m collaborating with the world itself. What the city gave us each day was with the people around us, the energy, the light and texture. The daylight is a big part of what makes the city so fun to work with.

While we filmed, the light would change constantly. I would talk with my camera team, Soren and Luke, and ask, “Do we want this scene to be sunny or cloudy?” If we waited a few minutes, we would have what we wanted. What more can you ask for? This is the definition of having God on your side. That is a huge part of what makes Dove so much fun to watch.

I’ve traveled a fair amount all over the world, and I grew up in New York. I have a pretty good sense of safety, and I also know when to trust local knowledge. In Bogotá, I was surprised to hear from residents that many places that appear safe are often quite dangerous. The most important thing is to be surrounded by people who know the streets well, and I always felt like I was in good hands. 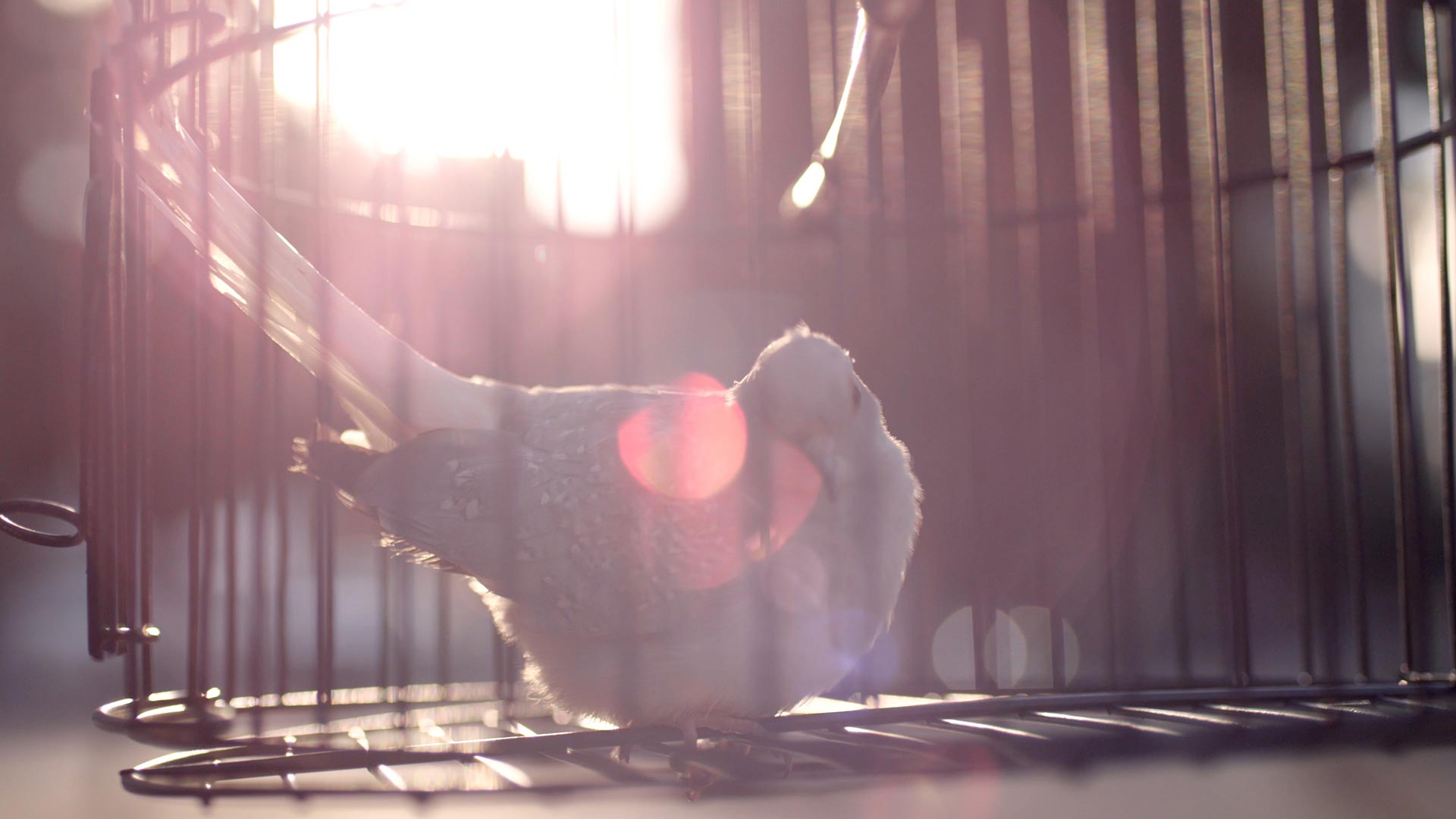 How many people were in the crew?

​We came from New York as a team of six: our two dancers, Kia and Taina, and four crew members. We hired several local helpers: a camera assistant, driver and coordinator, photographer, and fixer. Even though our crew had experience in Bogotá, it would be impossible to have had such a successful experience if we didn’t have great local help that was motivated by our mission.

How long were you there?

​This was a passion project, and it was self­funded. In these cases, you make decisions quickly, and are often motivated by instinct and budget. My daughter was born a month before the shoot, so we bought tickets just before she was born. I stayed only very briefly in the city, so I could get home to her and my wife.

Jacob Krupnick is a New York based director and photographer living in Brooklyn, NY. He is a founder of Shootbooth​, a one-­of­-a­kind photo booth that makes fantastic pictures of fleeting moments. He makes his own ice cream and rides bikes a lot.