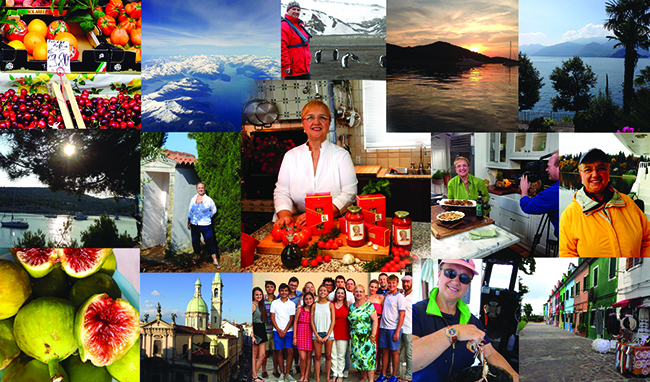 Lidia Bastianich is renowned as one of television’s most popular chefs, a restaurateur, and cookbook
author. Today, she reflects on her journey, passion for food, and the expansion of her empire. 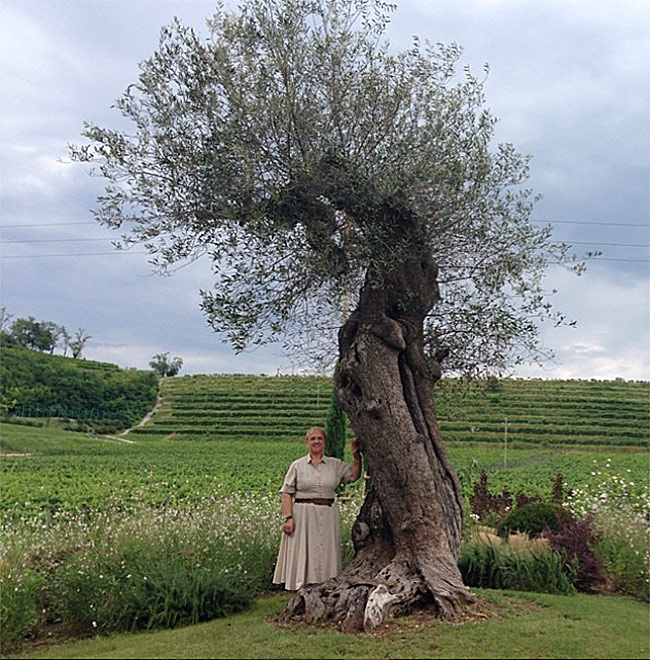 At this time, some of the world’s most pressing issues surround war, displacement, immigration,
and identity. Were you a World War II border child?

Lidia Bastianich: I was born in Allied controlled Pola. At the end of World War II the victorious wartime Allied powers, negotiated the details of peace treaties and borders with Italy, Romania, Hungary, Bulgaria, and Finland. The Paris Treaty was signed on February 10, 1947. I was born a few days later. The area was under Allied supervision until June of 1947, when the treaty was ratified.

Editor’s Note: The Paris Treaty required Italy to cede most of Istria, including the province of Pola (where Lidia was born) to Yugoslavia. The area later became governed by the communists.

Now more than ever borders are such a discussion and problem because people are kind of left in nowhere land, like the Jerusalem incident. If you were born in Jerusalem you are not Israeli or Palestinian, so what are you? Border people go through a lot. They are unidentified, and feel unsure for the rest of their lives, and ask “Where was I born? Who am I?”

I know I’m Italian, but it’s such a predicament after wars, and it’s still going on today.

I feel for all of these people around the world with the border situations and what they’re going through with their families. Having to escape, hide, and hide your identity. If only they could sit at a table together and eat each other’s food, and maybe come to some sort of moral understanding. Why do so many people have to suffer? Why is there continuous war? I’m a product of war.

What was it like for you to realize that your family would have to flee communism and
live in a refugee camp?

At first the area was under Allied Forces control. Later the border closed and literally the Iron Curtain went up. People dictated Communism and you had to abide by these rules, like not going to church, not speaking Italian. My father had a little business. He had two trucks, moving things around Istria for the farmers. They took all of that away because he was considered a capitalist.

In 1956 my parents secretly decided that we were going to flee. You wouldn’t tell children that, because if it was found out, the communists would have put my mother and father in prison for thinking of leaving.

My brother and I were told that our aunt on the other side of the border, in Italy, was ill and we had to go see her. Yugoslavia wouldn’t allow the whole family to travel together. My father had to stay behind. After two weeks my father literally escaped. He paid someone to take him to the border. He was shot at and there were dogs chasing after him, but he made it and joined us.

When we children realized that we were not going back, we thought, “What are we going to do?” As a child I remember a lot of recalls like, “I didn’t say goodbye to Grandma”. I remembered taking care of the animals, and the gardening. I think that’s where food passions came from. I think my desire to continue with food is because food was my memory. Then I realized that I wasn’t going back and I had anxiety about not saying goodbye to grandma. I think that was the initial connection to the love affair I had with food. I needed it to smell my Grandmother again and to taste the places that I was ripped off from.

Later my parents realized that maybe the best thing would be to move on in the world and create a new life. If you were Italian, once you got back to Italy you would be able to get back our Italian citizenship. However, if we did that we could not move on and migrate because there was no open immigration for Italians. We went into the refugee camp that was a camp for people escaping communism from all over Eastern Europe. We stayed in the refugee camp for two years, waiting for an opportunity to migrate.

Everything in the camp was controlled. You had the guards and you had to check in and out. We weren’t prisoners, but there were rules and regulations for the camp. They had a mess hall and I was in line with everybody else to get my meals. They had big, long, tables where we would sit all together. There were three big floors, like a loft. On the top floors there were young ladies that escaped and were by themselves. We were on the second floor living in this big room with all the families together. The divisions were little boxes, sometimes divided by sheets or plywood. There were communal bathrooms. I still hear the sounds of the night with all these people, children crying, arguing, etc. I would remember sometimes there would be groups of people singing songs in their own languages, out of melancholy.

I think because my outcome is so positive, I look at all these steps in life, that one could consider negative, I consider them as making me richer. Being in line for food and having to depend on somebody for food, makes you really appreciate for the rest of your life, every piece of food that you get. I think my passion and love to share food, also has some base from that experience. It was a great human experience, that formed how I feel today.

After leaving war torn Europe, were you surprised by the atmosphere in America?

In 1958, I had the opportunity to come to America. President Eisenhower opened the immigration for refugees fleeing communism. I felt this was my home now and I’m gonna be American as fast as I can. Within a year, my brother and I spoke English. You could get your citizenship when you turned 18. My birthday was in February and by April I got my citizenship. I was the first in my family to become a citizen. I wanted to make sure that this was my home, and nobody was going to kick me out of any place again.

You’ve become, out of circumstance and curiosity, an anthropologist?

Yes, I attended classes and taught classes, in Food Anthropology at Pace University, with an anthropology professor. You can trace history by the architecture and food of a place. Food is one of those things that transcends and stays in the culture. 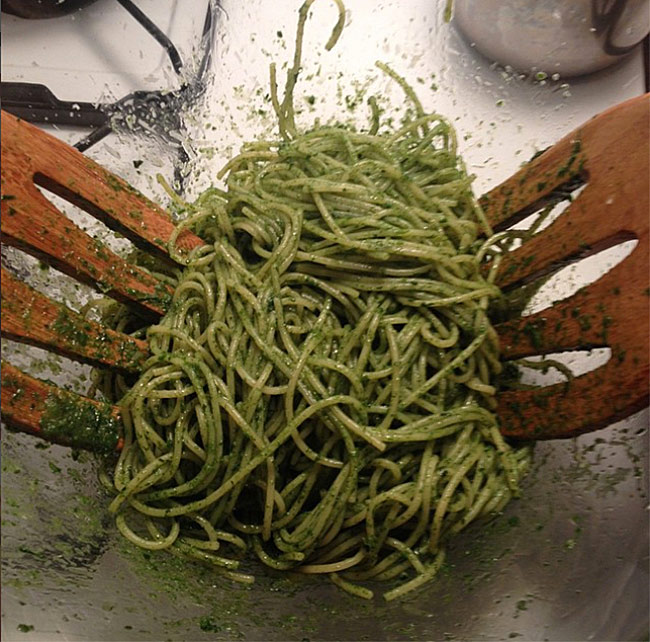 Your restaurant and retail store Eataly, in New York, has expanded to Sao Paulo, Brazil?

Yes, we did. We also have a store in Chicago, that’s two years old. I was down in Sao Paulo three weeks ago. We opened the store and it’s going fantastic. The plans are to open in the Twin Towers in November. We are also going to open in L.A., and Boston. We are moving along in the United States. People just love the store, it’s a wonderful setting. 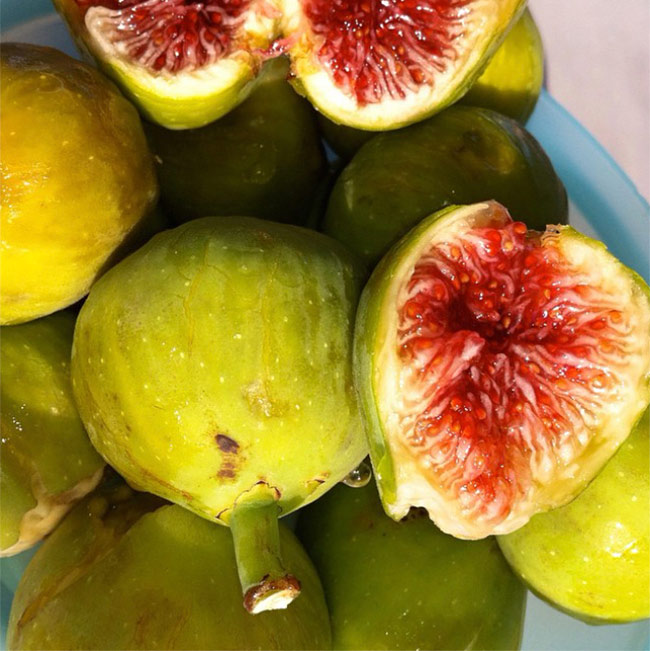 If God, said, “Lidia, It’s time for you to check out of this life.” What would you want for your last supper?

I would want really simple food. Great white figs, because I remember the figs of my childhood. We had to climb a fig tree, for many a meal. Figs are very filling. Sometimes we made sandwiches of figs with bread and it was delicious. I would also have some prosciutto. Grandpa used to make prosciutto from the slaughter of the pig in mid November. I would also have some spaghetti with clam sauce. I love my fish, love my pasta. A good glass of local wine and I’m all set! 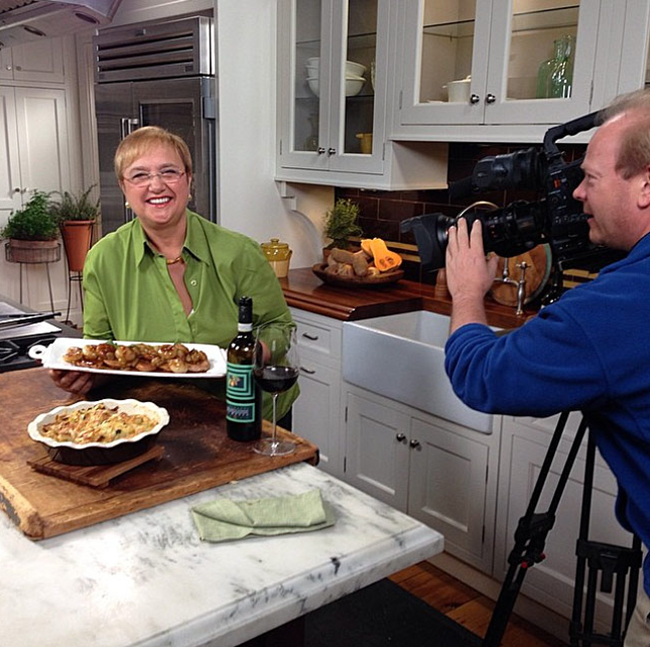 With several successful TV series, you’re the queen of kitchen on PBS. What does your production schedule entail?

My television production company, Tavola Productions, has produced over 450 episodes. I have a production team, camera men, and producers that I have been working with for years. We spend two months shooting in italy, and approximately three months in U.S. locations.

Our series includes Lidia’s Italy, Lidia’s Italy In America. We shoot 26 episodes per season. Each episode of our shows attracts 2-3 million viewers. We have a worldwide audience of 50 million. The shows are seen throughout the United States, South America, the Middle East, and many other countries. Last year we won an Emmy award.

December 11th, my new show Lidia Celebrates America will debut. The show is a Christmas time special in partnership with WGBH. It will feature four families special rites of passage, marking some of the most meaningful moments in life’s journey. We learn about their culture and food, and at the end have a big group dinner. There will be special guests including Marcus Samuelsson and Stanley Tucci. 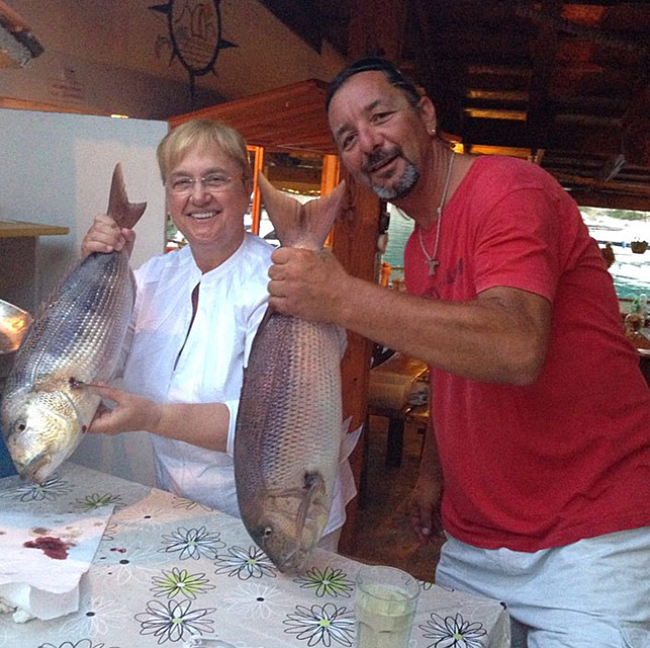 What is a typical location shoot day involve?

It requires a lot of specific research and scheduling. I have a great team. A five minute segment that a viewer watches, usually takes four hours to produce. By 7:30 am we’re usually out to shoot what we call B­-roll footage (behind the scenes, tour). I have hair and makeup done. The crew is setting up lights, and we shoot interviews. If I see a product that I think is interesting, I just pick it up and start talking about it, and it gets filmed. We have had many happy moments on locations, nothing bad except when a dog starts barking or chasing after you. 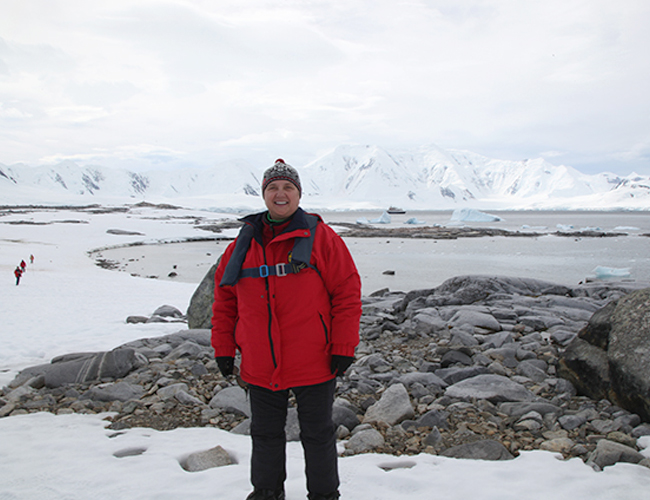 Do you do any personal travel outside of Italy and the U.S.?

I travel all the time. I stopped buying gifts for my family, so now I tell my grandchildren that they can choose a place anywhere in the world, to go on a trip with Grandma. For graduation, I’m taking my grandson on a fishing trip to Alaska. We are going salmon fishing.

I’ve recently been going to Buenos Aires and Uruguay. I Iike to recharge with nature. Last year I went to Antarctica and it was the closest I’ve been to God. In that environment with the icebergs, snow, and silence, you really realize that you are just a speck in the universe.

What are your packing essentials?

Electrical adapters, scarves, beauty products and lots of underwear. You never know when you will need more underwear. I don’t like to have to run around searching for what I need. I always check the weather report to make sure I have proper outerwear too. For the IPod I like to listen to classical music, Fabien, the Beatles, Peter, Paul, and Mary, and Italian folk music. I never got into the heavy metal, like Metallica. My kids liked it, but I thought it would kill my ears.

You are no longer married. Do you have a hot, young, Italian squeeze?

I wish I had a few! I have “friends” to go to concerts with, have dinner, etc. But I am single and my life is full, so I am not ready for a commitment. However, I would like to have “friends” on each continent!